The initial symptoms of radiation sickness - vomiting, nausea and diarrhea - are followed by a latency period.

It's only later that much more fatal symptoms appear, such as deterioration of bone marrow and horrible burns that eat flesh down to the bone.

When they arrived at the clinic, it was very hard, psychologically speaking.

They came straight from the airport. Almost all of them were young.

They arrived during the latency period. They felt fine. They were all dressed alike, wearing the same pyjamas. They were making jokes.

But we already knew that a lot of them were going to die. 27 of them died quite quickly.

They'd all received huge doses of radiation and were suffering from life-threatening burns.

For 15 years, only the first victims will be acknowledged by the authorities.

Thirty kilometres east of the plant, the forest has been scorched by the radioactive blast from the explosion. 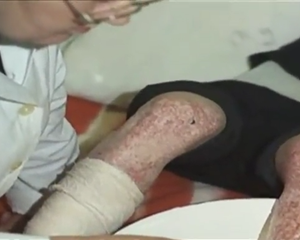 But the disaster area already stretches well beyond.

Since the explosion, radioactive particles carried by the clouds have been falling with the rain.

A "leopard-spot" pattern of contamination that affected the Ukraine as well as Belorussia and Russia.

On the first of May, the wind shifts, and areas of Kiev are also contaminated, as seen from this map drawn up from the readings taken by Colonel Grebeniouk's men.

The seriously contaminated areas appear in red, surrounded by areas where the radiation level was normal. But the population is still kept in the dark.

There is only one report, a tiny article on the bottom of page three of the Pravda, playing down the accident and claiming the danger has passed.

The roof was caving in, and there we were acting as if nothing was happening.

By going ahead with the May Day festivities, it was like the country refused to acknowledge the situation.

That was the second phase in the huge Chernobyl disaster.